Welcome to our blog on all things business........specifically mergers and acqusitions, business brokerage, investment banking and business valuation. We are happy to share thoughts and ideas in an open forum for the betterment of the services we offer. Real World experience coupled with formal education and credentials result in a formidable advisory offering with our client's best interests in mind. Please feel free to comment on the articles you find here. We consider the learning process to be ongoing and welcome any constructive feedback offered.

Are you creating value or .......destroying value

Most large corporations know and understand their cost of capital. It is the yardstick by which most measure success and the hurdle rate many use to determine whether to undertake a project ......or not.
Is the cost of capital for small to mid market business owners an important statistic to understand? I believe it is because any business owner who is not getting a rate of return on their investment in excess of their cost of capital is ...... well......actually destroying the value of their company.
The cost of capital consists of 2 components- debt and equity. It is typical for these numbers to be summed up in the Weighted Average Cost of Capital (WACC). For purposes of this article, we will simply consider the cost of capital to be the same thing.
For debt, the calculation is simple; what is the interest rate you are paying for the debt currently on you books. Cost of Equity is a bit harder to quantify. No one, like a bank, does this for you. You have to factor in many variables such as opportunity costs, and most importantly "Risk". Risk is that all encompassing term that attempts to quantify how sure the stockholder (owner) is that they will get their initial investment back (at a minimum) and how likely they will get the return they expected to get on their investment. Sounds complicated but, it doesn’t have to be.
Many publicly traded, large companies enjoy an overall cost of capital in the high single digits at this time (7%-10%) based on the ease in which they enter the equity market (stock exchanges) and preferential interest rates afforded to them by banks, as well as, their ability to issue their own debt in the form of bonds. Certainly, the small to mid market business owner can borrow money (debt) close to the cost (interest rate) that a large company can, although it is still more economical for them to do so. Small business owners can borrow money with an interest rate that can range from 7% to 12%-20% depending on their funding source. The real difference appears on the equity side of the equation. Public companies can generate cash by selling company stock on one of the stock exchanges. Their cost of equity is typically still in the high single digits due to a myriad of factors, not the least of which is the risk to an established, large company is significantly less than the risk associated with a small business that may be only a phone call away from oblivion.
So, what is the cost of equity for a small to mid market business? Does anyone have any data on what those numbers are? Pepperdine University and Midas Nation (Rob Slee's group) have attempted to quantify private companies cost of capital by coming up with the Pepperdine Private Capital Market Line: 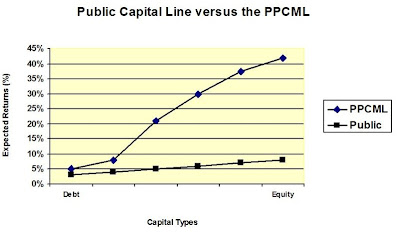 As mentioned earlier, the cost of debt for privately held and publicly traded entities are fairly similar but, as we move toward the equity side, the difference becomes very pronounced. At its pinnacle, the cost for privately held businesses that is funded solely by equity is approximately 40%, while their publicly held, “big brother’s” cost of equity is about 10%. That means that if a privately held business was funded completely by equity (likely owner cash) the expected rate of return on that investment is over 40%. Any rate of return below that threshold is actually destroying the value of the company. To be clear, most privately held businesses have a capital structure that includes both debt and equity but, the typical small business has a much higher percentage of equity than debt in the mix. It is very common for a small to medium size business to have an overall cost of capital in the 25%-35% range. Although those numbers are less than 40%, they are still significantly higher than for a publicly held corporation. Small to mid market businesses require this significantly higher rate of return due to the risk associated with them.
So, do you know if you are creating, or destroying, the value of your company?
Do you know your cost of capital?
Cliff Olin, CM&AA, CEPA and principal at Olin Capital Advisors, a small to mid market, mergers and acquisitions advisory and exit planning firm. He can be reached at colin@olincapital.com
Posted by Olin Capital Advisors at 6:48 PM